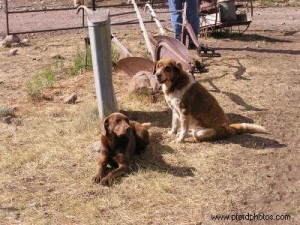 MudFlap and Kizzy waiting for rides to go out.

While most people think of horses when they hear the term “dude ranch,” many ranches, like ours here in the southern Colorado Rockies, are also about the dogs.   Just a bit of background on us here at Rainbow Trout Ranch:  we are a long-time dude ranch dating back to the 1920’s although we are about to celebrate our twentieth season at the ranch this year.  It has been a wonderful twenty years of sharing our family lifestyle and home with other families and folks from all over the world.   Of course horses are an absolutely integral part of that, but again, it is also about the dogs…

Over the years, we’ve had some truly wonderful dogs.  Kizzy was a small puppy with a broken leg and clear signs of abuse.  We had her all her life until she was gently laid to rest at the foot of a lovely old cottonwood down near the river where we have our bi-weekly cookouts.  We’ve had Magpie and Sage and Echo.  We had Tailpipe, whom we rescued two years ago but sadly she never got over her habit of chasing cars and it finally got her.  We now have HubCap who we  adopted from the local Humane League.  She is a cheerful, energetic dog who has become fast friends with MudFlap.

And then there is MudFlap…  She is a chocolate lab, of sorts, and we’ve had her since she was a puppy.  We got her at Christmastime nine years ago and everyone in the family was allowed a vote for her name.  They came up with things like Tinsel, Present and other Christmas-themed ideas.  Derek wanted to name her Jesus…!  Anyway, I wanted “MudFlap” and since the children were too little to read then, somehow, miraculously, “MudFlap” it was.  She’s been a super dog for us–we went through the months of chewing everything, of teaching her not to chase horses and cattle, of teaching her to come when we called.  Luckily Kizzy was still around then and proved a wonderful mentor for her young friend.

In September of 2010 MudFlap was stepped on by a horse and came home with her back leg a bloody mess–literally.  We took her to the Vet right away and he did end up amputating a toe, but she just never healed well.  As another Vet (and guest/friend) told me, it became like an OCD condition and she just wouldn’t leave it alone, no matter what we did–and believe me we did it all.  Eventually we took her to another Vet and after a month of observation and experimenting with how to help her, he felt the best thing to do would be to amputate.  He did so at the end of August 2011 and we began another series of lampshade collars, wraps, sprays and so on. 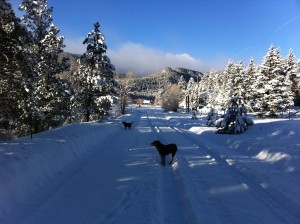 Always leading the way, MudFlap and HubCap with the Rainbow Trout Ranch barn behind.

But she has healed so well and now comes running with me and plays in the snow like she used to.  She carries huge sticks around and rocks and she is back to her old self.  In the marvelous way of animals, she has adapted, and although we do give her extra supplements to help her, she is doing great!

It will be such fun to ride with her again this summer.  I imagine the high mountain trails will be too tiring for her and we’ll try to keep her on the gentler rides, but we’ll just wait and see.  It is said that you are lucky if you own one great dog–we are truly blessed then as we’ve had a number of super dogs and two very special ones.  I know one day that MudFlap will join Kizzy down by the riverside,  but for now, we are just enjoying and appreciating  her, three legs and all…