Well , it is 1pm here in sunny England. It is an extraordinary 23 degrees here (now that is not freezing point, as in Fahrenheit it is nearly 75 degrees and very warm), but am I outside enjoying this mad March weather? Am I heck! I am chained to my desk as usual, transcribing interviews. Well, at least it isn’t stats today. But I have been here for 3 hours. Late start today as I had  to queue up for petrol (sorry, gas!) as we have a tanker driver strike in the offing and the world has gone mad. Anyway, my tank is now full and I am now $150 dollars out of pocket. Yes, that is how much it costs to fill the tank in an average family car now. And a family car in the UK is half the size of any cars in the US. Anyway, enough moaning.  Three hours work means I am overdue for a look at what’s happening at RTR! And lo and behold, my first blog post is advertised. Along with a photo of me riding my beloved Holliday, a real RTR star. Regular visitors will know that Holliday is a feisty little horse with an enormous heart, and if you visit the ranch in the middle of September you will have to fight me to ride him!!!  But don’t worry, as Jane has lots of other great horses for you to ride, as I always discover on Holliday’s day off- Redford and Charlie get an honourable mention here.

Do you have a favourite RTR horse? My husband’s favourite was Spruce, a gentle giant, who persuaded him that riding is fun and that for a man who doesn’t like horses there is a lot of pleasure to found in grooming your horse and giving her apple at the end of the day. 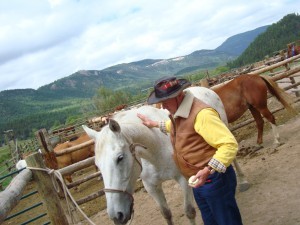 Spruce and Huw at the end of the day 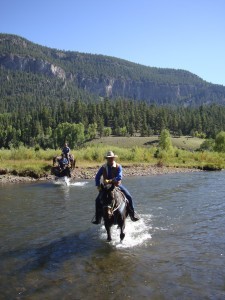 Huw on Riata on the river ride.

Men are fickle creatures though, and in 2010 he transferred his affections to another mare – Riata – after discovering that loping fast can be fun, and that she too liked a fuss and an apple after a ride. It is extraordinary how many photos I have of him with a horse and a grin. For a man who doesn’t like horses, that’s pretty amazing. What’s amazing too is that this man who doesn’t like horses is preparing for his fourth trip to RTR.

Well. I am preparing for him (new jeans planned if the Texas delivery works out OK!), but he is looking forward to it. I heard him talking about it to someone the other day, but he would never admit it to me that he loves RTR as much as I do. I’ll post some pictures of him with the two loves of his life- Spruce and Riata- and the other two loves of his life- fishing and cigars (they keep away the mosquitoes apparently. Now I have never seen a mosquito at RTR, maybe it’s the time of year or the altitude or I eat lots of Marmite? Who knows.)

I would love to hear about your favourite RTR horse. I did say to Jane that a section on the website about all the individual horses with a photo of each would be fun. Mind you, that would spoil Jane’s fun over the annual ‘New Wrangler ‘ competition , where they have to go into the corral and name as many horse as possible. After three visits I can name several, as long as they are distinctive , a skewbald (sorry, paint!) like Zuni, or a draft horse like Duke, but all those bays and dark brown horses? Knowing all of them takes some doing. I seem to remember that Tammie was the winner in 2010, and there was even a prize. Well deserved I’m sure.  The wranglers and all the staff do a tremendous job. Just don’t ask them ‘How many horses do you have on the ranch?’ Mind you, even if they’ve already answered that question every day since the season started and you are visiting in the fall (see, I can speak some American!), you can be sure they will answer with a  smile. As I said before, RTR is that kind of place. 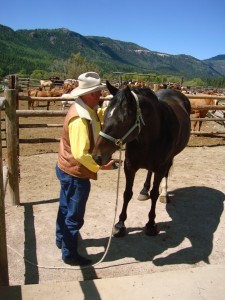