The Horse We Shared at the Colorado Dude Ranch


A TRIBUTE TO CD,

The Horse We Shared 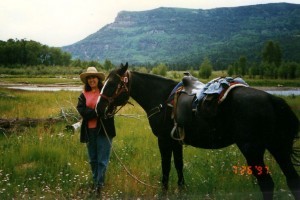 Our family first came to Rainbow Trout Ranch in July of 1997.   Before we arrived, I spent a good deal of time discussing horse choices with Jane on the phone.  I had enough riding experience to want a horse with some spunk, but being afraid of heights, I also wanted a horse that I could absolutely rely on to be cautious and sure-footed on steep trails.   Jane decided that the best horse for me was CD, short for Coupe DeVille.   On my first ride out, I immediately fell in love with this handsome dark brown horse with the white socks and forehead  blaze.

When I was feeling comfortable in the flat meadows and on the logging road, CD let me be totally in charge, and responded to my slightest nudge of the reins.  But when I got nervous on a trail high above the Conejos, CD would look back at me as if to say, “Do you think I’d let us both fall off that cliff?  Trust me, lady, I’ve got this!”  and he would carefully pick his way among the rocks, keeping well away from the steep drop. 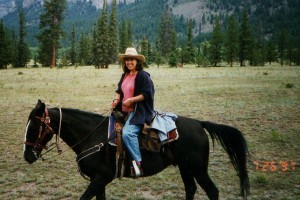 By the end of our first week at RTR, I was so enthralled with CD that my husband Jim joked that he had never imagined having a horse as a rival for his wife’s affection.  When we returned home to Michigan, he bought me my own little stuffed CD, which has sat on a table in my office for the last fifteen years. 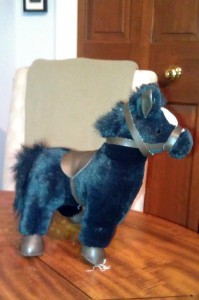 Mini-CD, a gift from Jim to Andrea

When we returned for our second summer at RTR, I eagerly requested to ride CD again.  But to my disappointment (I remember I almost cried!) a long-time guest had requested CD, and he was the one who got to ride him that week.  Jane chose Roman for me that summer, and he was a wonderful horse, but when I brought an apple down to the barn for Roman, I always brought another one for CD.

During our first two summers at the ranch, Jim, recovering from shoulder surgery, had mostly hiked and fished while the children and I rode.  On our third trip, however, he decided that he wanted to master horseback riding and go on the overnight ride.  He wanted a really dependable horse for the week.  When Jane asked me if I’d rather ride Roman or CD, I realized that CD would actually be a perfect horse for Jim, so I chose Roman and offered Jim the gift of CD.   Since Jim and I always rode together, I got to spend a wonderful week with my husband and both of my favorite equine buddies.  From then on, when we returned to the ranch, I would ride Roman and Jim would ride CD.

It was with sadness that Jim and I read in the recent RTR News of CD’s passing.  We both loved that sweet horse, and hope that somewhere in Horse Heaven he is happily loping across a grassy meadow with his buddies (including Roman) who have also passed.  He has most definitely become part of our family’s history. 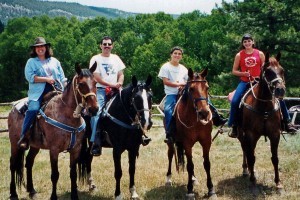