Getting to the Ranch…


I’m pleased to say I am typing this with two hands again as the wrist is on the mend. Only one more week in this horrid splint. Horray!

Although we have had our flights to the ranch booked for months, there is still plenty to think about in terms of a route. If you look at the website section on planning (http://rainbowtroutranch.com/colorado-dude-ranch-vacation/), you will find a map and suggestions. The southern portion of the ranch is less than a dozen miles from the New Mexico border. And many great arrival points are not far: Albuquerque 185 miles / Denver 240 miles / Santa Fe 135 miles / Colorado Springs 185 miles / Taos 70 miles / Alamosa 55 miles.

We are coming from the UK, and in the past we have flown into Albuquerque, Phoenix and Denver. Alberqueque was great as it gave us easy access to Santa Fe and we spent a couple of nights there and loved it. We were lucky enough to be there on an evening when the opera was on, and we went to a performance. The opera was amazing, but I couldn’t take my eyes off the even more spectacular backdrop of the Sangre de Cristo Mountains, as the theatre is open air. It was quite an experience.. 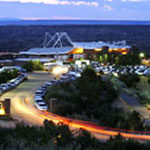 We also ordered a tailgate picnic in advance (I am learning to speak American you may notice!) and that was delicious and ideal for travellers. You can order that as the same time as you oreder your ticket at http://www.santafeopera.org/. The whole experience is highly recommended.

The drive on from Santa Fe is spectacular. You pass the famous Cumbres and Toltec Railway (http://www.cumbrestoltec.com/), which is America’s highest and longest steam operated narrow-guage railway. 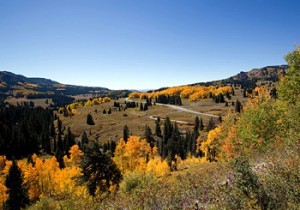 View from the narrow gauge steam train going over the nearby pass about 25 minutes from the ranch.

And as you near your journey’s end you can stop (24.5 miles from Chama, as you drive down from LaManga Pass)  where there is an overlook high above the gorgeous Conejos River Valley. You can see the river run through the valley; and across and below from you, you can even see Rainbow Trout Ranch! Jane has put a photo of this view, in the snow, on the Facebook page.

Chama is where my husband-who-doesn’t-like-horses (see previous blog) likes to go for some peace and quiet. Now there is more peace and quiet on the ranch than you could ever dream of, so I think what he really means is some peace and quiet from his wife………………. Anyway, said husband  is apt to drive to a little coffee shop in Chama to people-watch and read the paper. Rumour has it the owner is blonde and attentive – something about his accent I believe………………..! So if you are passing through Chama in Spetember, and she you see a man in a white Stetson talking to a blonde, ask if his name is Huw. Incidentally, Huw saw a bear on the road on one of his journeys to Chama, so keep your eyes open. He also came across a truck broken down on a blind bend and had to find a State trooper to help move it. So perhaps he goes to Chama for the adrenaline rush as well as the blonde!

The problem with flying to Albuquerque from the UK was that we had to change in Chicago. As we were delayed both ways by thunderstorms ,we decided to give that route a miss the nest time we travelled to RT. So, our second visit took us to Phoenix, where we could go direct. We then spent a week getting to the ranch. In our family it is a tradition that I get to choose where we go on my birthday. Having a birthday at the very end of August meant that we were often on holiday when the children were small, so after 2 weeks of doing child-friendly activities such as swimming and sand-castle building, I got to chose a trip to a church or a chateau or a museum. So when I realised I would be in Arizona on my birthday in 2008, I decided I would wake up in the Grand Canyon and go to sleep in Monument Valley. What a birthday that was! We rented a cabin right on the rim, so we saw the Grand Canyon at sunset and sunrise (http://www.usparklodging.com/grandcanyon/brightangel.php). At Monument Valley we stayed at Gouldings Lodge (http://www.gouldings.com/), and now whenever we watch a John Wayne western we are constantly jumping up and down shouting ‘been there!’

On out third trip we flew into Denver, so we could head straight for the ranch after a short night in the hotel. We only had 2 weeks holiday that year and we wanted to spend all of that at the ranch. But even driving from Denver there a variety of routes, so we turned to an old RT guest and friend, Deeno, for advice.  Here are his suggestions:

Route I:  US 285 West from Denver through the Foothills over Kenosha Pass and down into the South Park Valley.  The first town you come to is Fairplay, and would be a good place for lunch in one of their cafes or diners.  Definitely plan on visiting South Park City (and, yes, that TV cartoon show got it’s name from there!), a restored outdoor museum featuring the town as it was 100+ years ago, complete with all of the stores, shops, et al. …. great slice of Americana from the 1800’s.  Continue South on US 285 through Buena Vista, Salida, Alamosa and Antonito before heading West on Highway 17 to RTR.  With stop for lunch and South Park City, I would allow the majority of the day, but a good 7+ hours.  The downside of this route is that most of the highway is only 2 lanes once you get part way through the Foothills West of Denver.

Route II:  I-25 South from Denver through Colorado Springs, Pueblo and then Walsenburg, taking the first exit towards Highway 160.  That’s a 2-3 lane Interstate all of the way, driving right along the base of the Foothills.  The scenery is magnificent in and of its own right, passing Pikes Peak and the Garden Of The Gods to the West of Colorado Springs, and then relishing your first view of the Spanish Peaks when you come over the Colorado City rise just South of Pueblo.  There are a variety of restaurants when you first get off the highway in Walsenburg, but nothing to write home about …. think very fast food, but a good bathroom break.  You will pick up Highway 160 in downtown Walsenburg and start heading West before climbing over La Vita Pass and winding down into the San Luis Valley at Fort Garland on the West side of the Pass.  There are several restaurants and gas stations there, a much better choice for lunch.  There is also a restored frontier fort worth touring.  Instead of proceeding West on 160 to Alamosa, take Highway 159 South form Fort Garland (the road that the fort is on!) to the town of San Luis (the oldest town in Colorado), then head out West on Highway 142 towards Manassa and Romeo to Highway 285.  The drive across the San Luis Valley floor is astounding, with Mount Blanca and her sisters to the North, the Sangre De Christo’s behind, and San Antonio Mountain to the South …. absolutely magnificent, AND you avoid all of the Alamosa-bound traffic both on 160 and 285.  Manassa is where the Van Berkum Kiddos attend school (well, at least Caroline and Derek, as Mary-Anne has moved on to middle school up on 285), and it’s the home of famous American boxer Jack Dempsey, who is featured in a museum there.  When you hit US 285, turn South (Left)  and you’re just 7 miles short of Antonito.  This is my favored route to the Ranch, and it’s about 5 hours with a stop for lunch …. add a little more for other stops.

Route III:  The best of both Route I & II, but would probably require a stay overnight in Manitou Springs, a western suburb of Colorado Springs, or a very early start from Denver.  The whole reason for this: the magnificent Pikes Peak Cog Railway (http://www.cograilway.com/default.asp).  I’ve been up it many times, and it’s well worth the time and money.  The words to “America The Beautiful” were written from the top of this 14,000+-foot peak.  DEFINITELY MAKE RESERVATIONS WELL IN ADVANCE!  As the Web site says, plan just over 3 hours for the roundtrip, which start at 8:00 AM and run throughout the day.  Take I-25 South from Denver, exiting onto Highway 24 West and proceed to the first Manitou Springs exit, following the signs to the PP Cog Railway.  (The PPCR site has excellent directions.  Stop for lunch in one of the quaint little cafes in Manitou Springs just a few blocks from the PPCR, then head back West on 24 through Woodland Park, Divide, Lake George, and over Wilkerson Pass before dropping down into the South Park Valley.  You will intersect US 285 just South Of Buena Vista, then it’s back to the later part of Route I.

We took Route One, and had planned a stop at South Park, but in the end the call of RTR was just too strong and we just kept going. That is the point of all these journeys after all  – to get to RTR. The journeys were great fun, and we saw some amazing places, but it was RTR that was the highlight of our  trip.

Do let me know your favourite ways to get to the ranch. We are flying to Denver again in September, but as we have 3 weeks we have a bit of a road trip first. More of that next time………….. 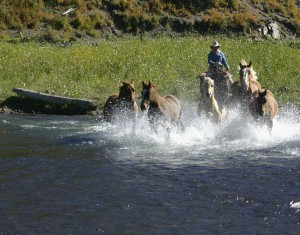 Bringing in the Rainbow Trout Ranch herd across the Conejos River.