THE STORY OF ZORRO:  A RAINBOW TROUT RANCH LEGEND ABOUT A HORSE WHO WENT WALKABOUT 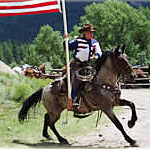 The Story of Zorro

We operate a beautiful dude ranch set in a picturesque river valley here in the San Juan Mountains range of the southern Colorado Rockies. When we stand in the shade of the massive porch that hugs the lodge, we look south across the horse pasture towards the mountains that drift down towards New Mexico. Behind us the mountains rise once more, to a plateau of meadows and aspen groves which one doesn’t expect by looking at them. It is here that we take all-day rides, and in previous years a weekly overnight ride.  It is a steep climb up and hard on the horses but well worth it once what we call the “backcountry” is reached. Imagine if you will, a seventy mile view across the vast San Luis Valley to the Sangre de Cristo Mountains and Mt. Blanca, Colorado’s fourth highest peak. This is the backdrop for a unique story that took place in 1994.

It was our second summer in operation, although the ranch was established in the 1920’s. We were offering our weekly overnight and this particular week in June, seven guests and a wrangler rode up to the backcountry. One of the guests was riding a relatively new horse, a splendid roan with a Z brand on his hip which led unanimously to the name Zorro. The next morning, seven guests returned with six horses and a rather shamefaced wrangler. Sometime in the night, Zorro had obviously pulled out the metal stake to which his long picket line had been tied. Having this stake clattering along behind him, in effect chasing him, had sent poor Zorro off in a blind rush through the trees and into the heart of the backcountry. The wrangler didn’t discover his absence until morning and after a futile search he and the guests returned to the ranch.

That night after guest rides, the wranglers went up to the backcountry and searched for Zorro, but other than the clear drag marks made by his picket rope we weren’t able to find him. All that summer we searched when we could, in the evenings, on Sundays, on subsequent overnight trips. Once in awhile we’d hear a neigh, or think we had, or one of the horses we were riding would prick his ears and gaze off, but still no Zorro. In the fall, the cowboys moving the cattle down for the winter spotted him but he evaded any attempts to herd him down and vanished into the aspens and pines. Still later, hunters saw him and tried to capture him, but Zorro had gone wild and wasn’t looking back.

We all figured that he would make his way down to one of the ranches in the foothills and find friends there—horses are very herd bound and need the company of other horses. But although we put the word out, we never heard anything. It was a cold hard winter but that next summer of 1995, on our very first overnight, we met a very thin and bedraggled Zorro grazing in a meadow. He waited until we were quite close before disappearing over a ridge—he even ran like an elk at this point. All that summer we looked for him when we were up in the backcountry, but other than a fleeting glimpse here or there, we didn’t find him.

He became legendary. The Forest Service was upset as we weren’t permitted to loose-graze horses up there, but neither they nor we could do much about it. We did let it be known that there was a reward for anyone who could catch him, but no one could even find him, let alone catch him. So Zorro remained. Fall blew in and the cowboys and hunters came once again, but Zorro refused to return to civilization. That winter was mild but we still thought of him up there, shaggy and lonely without even the elk to keep him company.

In the late Spring of 1996 we got a call from folks about fifteen miles up the road who had seen a big roan horse grazing by the fast flowing Conejos River. We figured it had to be him, come down for water that had become scarce in the high country, so we prepared ourselves for the ride of our lives.

Three of us gathered our best rope horses, our ropes and all the gear we could think of. This was it–this was our chance and come what may we were going to get him. After two years it was time to bring him home no matter what we had to ride through. Thus determined we set off that afternoon.

It was indeed Zorro, fat and sleek and grazing peacefully by the river. He had conveniently chosen to be quite near some old corrals used to bring the summer cattle in and out; and from a cautious distance we made plans to get him to these–with plenty of  backup and just-in-case plans besides.

December 2012:  I rode Zorro for many years and I can’t imagine how many miles we put on together.  But on June 15, 2010 Zorro was laid to rest at the south end of the ranch after a battle with cancer.  We don’t know exactly how old he was, but we figure about twenty-five or so.   No horse can hold the place in my heart that Zorro did.  I am grateful that he was such a wonderful part of my life and I know that he is happy in greener pastures now. 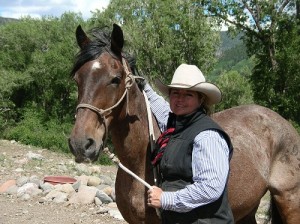