With 130 horses at our southern Colorado dude ranch, you can imagine we go through alot of hay since the terrain here is spectacular, but not conducive to enough grazing to support that many.  So our hay bills run high and we are always on the lookout for creative ways to care for our herd. 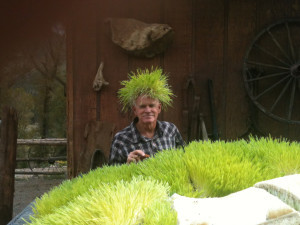 Guest “Dazza” explores a different use for fodder!

So with that in mind, Doug (seasoned dude rancher, farmer and my father-in-law) started looking into what they term “fodder” but which is in actuality hydroponic hay.  The term comes from Australia where the use of hydroponics is widespread, and where the largely arid climate requires alternative sources of feed for livestock.

Doug researched extensively and was largely instrumental in turning the dude ranch industry on to the production of fodder.  Indeed he attended the Colorado Dude and Guest Ranch Association convention with a tray of fodder as a “show and tell” not to mention attending various seminars.   To our knowledge, there are now at least six other ranches who own and operate fodder machines successfully, as well as any number of boarding facilities and horse properties. 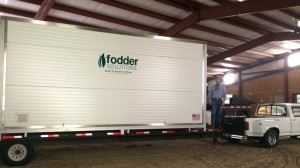 Our own experience has been a very positive one–after the headache of initial setup that is.   The unit arrived from California via semi in late May and the learning curve began.

The daily process begins with “seeding” which is laying out the barley on three-sectioned trays that fit into the semi-trailer type “box” with racks.  We use barley seed that is actually grown in the nearby San Luis Valley and didn’t make the grade with Coors Brewery, but it works just fine for us!

The unit is temperature and climate controlled and each day when you seed, you push yesterday’s tray forward until six days later the first trays come out the other end with about twelve inches of beautiful high protein, low colic danger, green grass that the horses love.  From then on you harvest and feed daily then clean the trays and re-seed for continuous production. 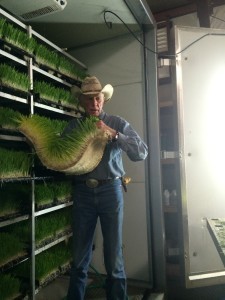 We had a really wonderful and busy summer and we worked our horses hard.  Since we offer very advanced riding in addition to gentler paces and trails, it is vital that along with routine maintenance such as dental work, chiropractor adjustments, deworming and vaccinations, our horses get good feed.  When they aren’t turned out to pasture for about five weeks of the summer, they subsist on two thirds hay and one third fodder.  They also have access to salt and mineral of course.

I can tell you that in late September, they looked great.  Even the older ones and the new ones (who always get thin as they adjust to herd life and to high altitude living) looked better than expected.  They are slick and shiny–or at least they were until they started their winter coats!–and healthy.  And we feel that much of that is owed to the fodder.

So while it is labor intensive to say the least, the results are excellent.  Rather like the commercial we’ve all seen:  Fodder machine:  ALOT (which will pay for itself in two years).   Labor:  plenty

.  Having your horses look better at the end of  an intense season than they did at the beginning:  PRICELESS. 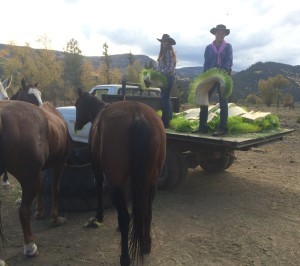