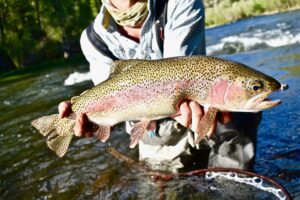 s we make our way into April, springtime is officially here in our southwestern world of Colorado! Even though March and April up in the mountains can be cold and snowy, summer is just around the corner! Once May arrives, all that snow up in the Colorado mountains melts and drains into the Conejos River and the creeks that feed it. The Conejos swells with water, sediment, and rises considerably usually clearing up around mid-late June. Seeing the river like this can be intimidating and downright scary at times, but it is also a great time to fish! June is one of our favorite times of year here on the Conejos and can give up some trophy-sized fish. Here are a few of our favorite things about fishing the Conejos River during June!

2. Fish are hungry and dumb

Winters up in these parts are long and cold. Food and fisherman are both scarce for the fish (Don’t worry though, Derek has been keeping them in line). Basically, June fish are a whole lot dumber and less picky than late season fish are.

I’ll go out on a limb here and say that the month of June produces the biggest trout of the season here at the ranch. 17 to 21+ inch fish are very common during this time... Big trout feel more protected in the discolored water, are less picky about their food, don’t get spooked as easily, and as the water warms up so does their feeding! 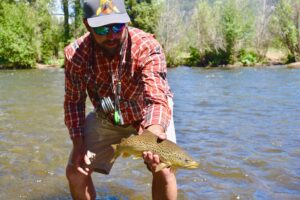 Turn over almost any rock in the Conejos during June and you’ll likely find it crawling with various types of stonefly nymphs. The Conejos has more species of stoneflies than any other stream in the state and they’re a highly sought after meal for our trout. Pro tip: Eating one as a snack while fishing is good luck and helps you think like a trout.

Ever see those huge black and orange bugs flying around while near the river? Those are giant adult stoneflies called Salmon flies. If runoff conditions and this hatch intersect at the right time (mid June) the fishing is absolutely unreal.. Large hungry trout (especially browns) angrily crush these flies as they land and try to swim off the water. Trust us you don’t want to miss out on it.

July and August are by far the busiest months of the summer, leaving the river much more open during June. Sounds great to us!

2X-4X tippet tied to large flies is what we run during this month which is great when fighting fish in the strong current! The runoff also adds a few inches of fight to every trout which is a nice bonus.

Photos for this blog post were supplied by our other long term fishing guide Sam Terlingo, an RTR staff member going on his 4th summer with us.