One of my resolutions for 2021 (and for many years, it seems) is to read more. So, when I was compiling a list for my family of what I might want for Christmas, and my birthday, I added a couple of books. One, a classic and a behemoth, is “Lonesome Dove,” by Larry McMurty. The novel is 858 pages, so it’s easy to see how the motion picture became four piece movie. It’s a winner of the Pulitzer Prize, and knowing that the book is usually better than the movie (and the movies were amazing), I know it’s time I tackle the giant western classic. The other book came up as a suggestion, it wasn’t one I was familiar with: “Cattle Kingdom: The Hidden History of the Cowboy West” by Christopher Knowlton. I found it here on Amazon. 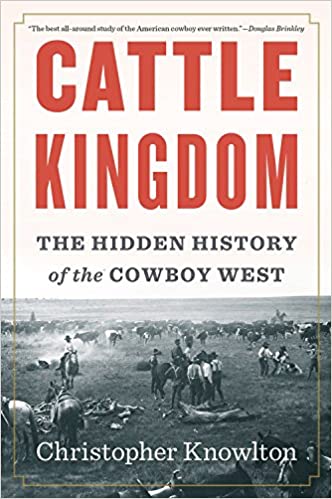 In school, history wasn’t a strong suit of mine. Memorizing dates and names didn’t come naturally, even though I knew it was information that I should be putting away in my mind. So, when I asked for the historical compilation of the west as a gift, I was skeptical that, if I received it, I would read it. When I opened it up for my birthday, I got excited about the prospect of learning, and found I was quickly through the first chapter. I was sending pictures of the cover to any friend that I thought might enjoy it. I was texting quotes from the book and reading to anyone who would listen. It’s had me hooked, and I’ve torn through the remaining.

The entire book is 426 pages, but the reference section at the back of the book encompasses 70 pages alone. Knowlton did an amazing job compiling so much history and making it a well-rounded effort. Diaries of cowboy out on the cattle trail in the mid- to late 1800s paint an amazing picture of the west and includes accounts from the ranch owners like Theodore Roosevelt and eager Europeans. There is so much to be learned, such as how the beef industry grew from practically nonexistent in the early 1800s, to dominating the meat market by the end of the century.

It includes the hardships that they faced, the rise and fall of different pieces and people involved in the business, and how it all intertwined with other pieces of history: the Civil War, the near-extinction of the Buffalo, where Henry Ford got the idea for the assembly line, and how certain cities, like Chicago, became more important than others.

Anyone in my friend group has heard me talk about “Cattle Kingdom,” which I’ve had for a week. And it reminds me of why I fell in love with the west. The author quotes Lewis Atherton, saying “The fears thus engendered by a rapidly burgeoning industrial and urban age encouraged people to idealize the life of the American cowboy.” I think that that still holds true today. Sometimes our advanced world is overwhelming, and there is nothing better than sitting in a meadow with the mountains in the distance while the horses graze, and all you can hear is the wind blow. That’s what the American west is romanticized to be, and in some parts, still is today.